Michael Jung (Creative Director) and Mark Renfrow (Show Director) sat down recently with the Disney Parks Blog  and answered questions about the new“Rivers of Light” show which opens on April 22nd at Animal Kingdom. The team worked closely with the park’s lead Imagineer Joe Rohde. to create a night time show that honored the beauty and unpredictability of animals. The team has worked closely with the animal teams to ensure it won’t effect the animals in the park. And of course what is a Disney show without music? The show’s music was composed by Mark Mancina and Don Harper created the production’s score, which was recorded at Abbey Road.

The show is about water and light and how the two elements work together to create something beautiful on the  Discovery River Lagoon in Disney’s Animal Kingdom Park. The new“Rivers of Light” amphitheater 5,000 guests per show, each side of the theater will be a village and each village will hold 2,500 guests who will also play a role in the show. There won’t be many areas outside of the theater to watch the story. Disney Parks Blog has confirmed there will be FastPass+ for the show, but did not announce when this option will become available or how seating for it will work. 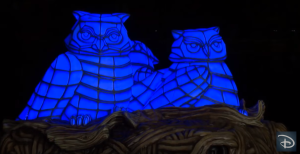 The show is original, but also a Disney story, so while Disney’s cartoon characters won’t be present in “Rivers of Light” guests will see two new original characters throughout the show. Guests will meet the two Asian guides Asma and Aditya the story tellers that wordlessly guide the show’s story. Asma which means human embodiment of water, her name means limitless. Aditya means light and son, he is the embodiment of fire and light. When the two work in harmony they create the show.

The lotus flower which will be a key part of the show (and will be a purchasable popcorn bucket) will be important to the story, because of the creators wanting to incorporate things that were important to Indian culture. The show will also use imagery from the Disney Nature Documentary series, as well as custom footage that the documentary teams shot just for“Rivers of Light”.