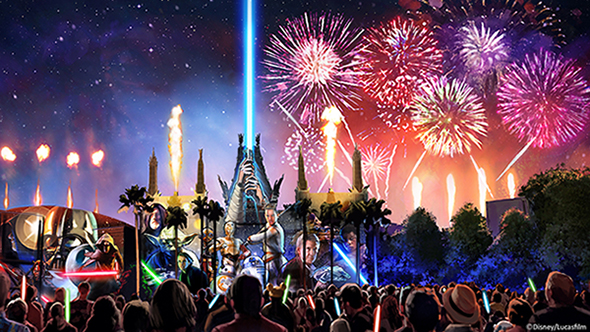 Following the extraordinary popularity of Star Wars: The Force Awakens, Walt Disney World® Resort is unveiling even more Star Wars-themed entertainment at Disney’s Hollywood Studios starting this spring – including one of the most elaborate fireworks and projection shows in the park’s history.

Just in time for spring, that “galaxy far, far away’’ will be closer than ever with the April 4, 2016 arrival of the new Star Wars live entertainment experience Star Wars: A Galaxy Far, Far Away. This new stage show celebrates iconic moments from the Star Wars saga with live vignettes featuring popular Star Wars characters, such as Kylo Ren, Chewbacca, Darth Vader and Darth Maul. The show will take place multiple times each day at the Center Stage area near The Great Movie Ride.

Also starting April 4th, Captain Phasma will lead a squad of First Order stormtroopers as they march in formation from Star WarsLaunch Bay to the Center Stage area in an intimidating demonstration of the First Order’s indomitable strength.

And, starting this summer, your Clients won’t want to miss the next generation of the current Star Wars-inspired fireworks show. This blockbuster nightly show, unprecedented in Disney’s Hollywood Studios history, will light up the sky with Star Wars-themed fireworks, lasers, light projections and other special effects combined with Star Wars-themed music, iconic characters and scenes from throughout the saga.

These new Star Wars entertainment elements, coupled with other recently-added Star Wars experiences, make Disney’s Hollywood Studios the place for fans to celebrate their Star Wars passion.  Contact us today for a quote or to book your out of this world adventure!